The desire for that famous Jennifer Lopez derriere is driving many women to cosmetic surgery clinics, but a word of caution from experts: you may be at risk. Is Brazilian Butt Lift dangerous? Doctors are afraid so.

The rate of mortality after Brazilian Butt Lift is 1:3,000, says the American Society of Plastic Surgeons (ASPS), noting that it is much higher than that of any other cosmetic surgery procedure.

Plastic Surgery Societies across America have taken note of the problem and have issued urgent warnings to patients regarding the risks of gluteal fat grafting.

The British Association of Aesthetic Plastic Surgeons (BAAPS) has even urged the surgeons to refrain from performing this procedure until more data has been collected.

The demand for Brazilian Butt Lift procedure is growing rapidly as more and more women are looking to get the shapely figure of celebrities like Kim Kardashian, Beyonce, or Nicki Minaj.

According to the ASPS, the demand for butt augmentation with fat grafting went up by 10 percent in 2017, as compared to the previous year.

This procedure serves a two-fold purpose—removing undesirable fat from another part of the body (such as tummy or love handles) and transferring it to the backside.

The surgery is performed under general anesthesia. The surgeon will first use liposuction to remove fat cells from other parts of your body. This fatty tissue will then be cleaned and processed to form a concentrate of just living fat cells, which is then injected into the backside.

The fat is placed in layers to create the desired shape of your buttocks. Over the next few months some of the fat cells die, while others engraft and live, giving a fatter appearance to your butt.

It is this combination of reducing the waist while enhancing your backside that makes this dual benefit procedure so appealing to most women.

Since it is transferring your own body tissue back to the body, it was initially considered safer than implants that have a higher risk of infection. But what makes butt lift dangerous? We analyzed some studies and researches: 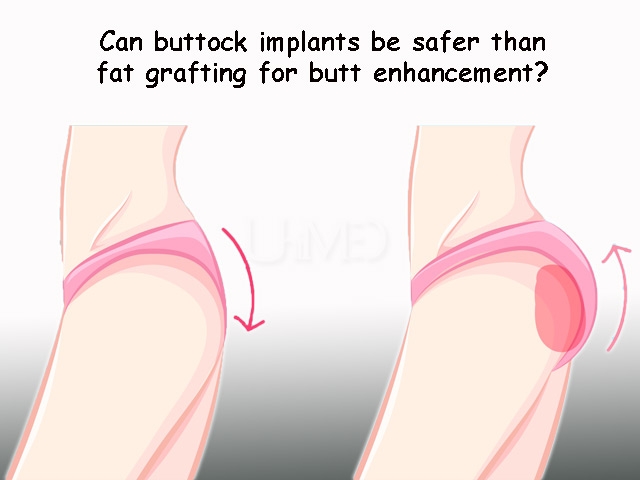 A 2017 survey recorded responses from 692 surgeons from across the world, after they checked the rate of mortality among patients who underwent Brazilian Butt Lift.

32 cases of death were reported due to fat embolism (obstruction of a blood vessel caused by a piece of fat). 103 non-fatal incidents were also recorded, and experts believe there might be many more which have gone unreported.

A cosmetic surgery study in 2015 identified the possible cause of complications in Brazilian Butt Lift. The researchers found that the gluteal blood vessels become damaged while injecting the fat cells and as a result, some of the injected fat seeps into the veins, which may be fatal.

Experts believe that the fat in butt lift procedure should not be injected too deep into the muscular planes.

In a recently reported case in the US, a woman died after Brazilian Butt Lift, even though the surgeons believed that injections were only made into the superficial layers. Her post-mortem revealed that gluteal blood vessels were damaged and there were fat particles in her heart and lungs.

Plastic surgeon Urmen Desai, M.D., explains to ABC 7 News: “Some surgeons are injecting a little too deep. There are some important veins that bring blood from the lower aspect of the legs back into the heart, into the lungs.”

It has also been noted that most deaths occurred either during the lipoinjection or just after the surgery, within 24 hours.

Other causes for complications

It is also known that fat grafting is done for breast enhancement and no deaths have been reported from that.

Researchers believe that other factors may be responsible for the high mortality rate in Brazilian Butt Lift, but fat embolism is definitely an important consequence to consider before undergoing this procedure.

The BAAPS mentions that other complications from Brazilian butt lifts can be caused by:

Most death cases were reported to have been performed by non-qualified, poorly skilled surgeons, who performed the surgeries at small, non-approved centers.

The matter recently picked heat due to a Brazilian celebrity plastic surgeon Denis Furtado, popularly known as “Dr Bumbum,” who was recently charged with murder after his poorly-performed butt lift caused the death of a patient at his home during surgery.

Assisted by some people, Furtado injected 300ml of Poly methyl methacrylate (PMMA) synthetic resin, also known as acrylic glass filler, into the buttocks of his patient, which possibly caused her death. The injected quantity is significantly higher than the recommended amount and the doctor was believed to have ignored important factors of patient safety while performing the procedure.

Furtado enjoyed a large following on social media and was openly advertising butt lift with PMMA despite many warnings of the Brazilian Plastic Surgery Society over its use.

Should you do the Brazilian Butt Lift?

Many people consider the effects of cosmetic surgery to not just be aesthetic but also functional and emotional. However, it should not come at a risk to your health and life.

If you really want to undergo Brazilian butt lift, it is imperative that you choose a highly skilled and qualified surgeon and make sure to discuss all the possible risks and complications before entering the operation theater.

It will also help to read more about the procedure so you can ask the right questions and make an informed decision.

Do you think the Brazilian Butt Lift can be made safer with better technique in the coming years?

Have a question? Write to us here: